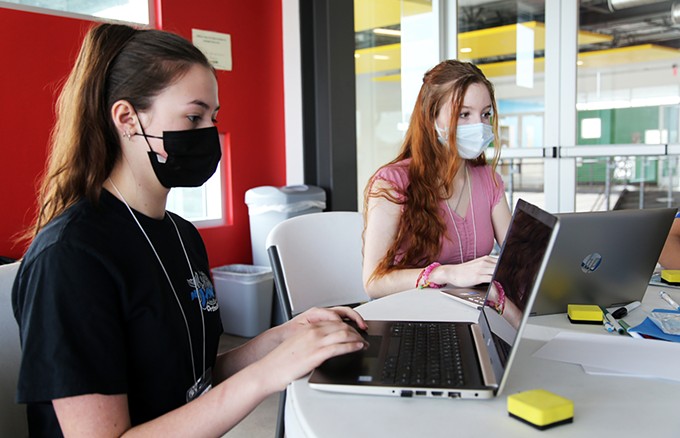 From left, Joselyn Pirro, 14, and Sagan Friskey, 18, work diligently at their computers learning Qiskit, a programming language that enables their computers to communicate with quantum computers.

This kind of computer requires quantum coding and when programmed could be used to help solve problems like mitigating the impacts of climate change; transportation mapping, such as figuring out how to remap the entire country of Australia with more efficient roadways; or even biomedical research, such as protein folding for vaccine development or drug discovery research.

“Back in 2019 Google ran a problem on their quantum computer that they estimated would take the most powerful supercomputer about 10,000 years to solve,” Meis said. “They said they got their (quantum) computers to solve it in less than two days.”

During the camp, students learned the programming language Qiskit, an open source (free) software development kit. Meis called it a Python-backed library, Python being a programming language. Qiskit allows the students’ classical computers — the kind most of use at home — to communicate with quantum computers. Ironically, although the students all had their laptops open, the learning was done on dry erase boards.

To bring quantum coding to the masses, the School developed the Quantum Quest camp and partners with other organizations to offer it locally. For Tucson, they partnered with the University of Arizona’s Office of Societal Impact and the Girl Scouts of Southern Arizona (GSSA).

“When this all came about it was the perfect marriage between the Coding School, the U of A and the Girl Scouts in trying to bring accessibility to this more advanced part of STEM,” Colleen McDonald said, director of staff supported programs for the GSSA. “As Girl Scouts we see ourselves as the connector. We want to make sure that all girls have access to it.”

The Coding School has been offering this camp for some time — this is its 10th camp — but it’s the first time it’s been offered in Tucson. Camp topics included everything from foundational concepts that make up the quantum world such as entanglement and qubits, and end with teaching girls how to code real quantum computers.

It’s all new science. These students are at the very foundation of quantum coding, according to Meis, and that is part of why it is so important to offer this to young women. One, they are introduced to quantum computing, but two, so they do not feel alone in their interest in this field, Meis said.

“This is a hard science, right?” Meis said. “We really want our students to feel that there’s a place in this for girls. We’re really trying to empower them now while they’re still in high school.”

“I’ve worked with girls for two decades doing STEM with them and one of the biggest things I hear is they think that they’re alone in liking STEM, that they don’t realize there are other girls who are also willing to push themselves,” Michelle Higgins added. She’s the associate director of the Office of Societal Impact.

The lead instructor for this camp is herself an example to these students. Emily Van Milligen is a doctoral student at the UArizona department of physics. Her field of study is quantum entanglement and routing protocols. She noticed that not one student fell behind; they all listened.

“They love it,” Van Milligen said. “They like the lectures I’m giving, which is exciting because that means they enjoy the content. I’m not doing anything that special.”

“I think it’s super interesting to learn about, especially since we’re at the very beginning of it becoming a part of something that you can learn about and work with,” she said.

Gabriela Malo-Molina, 14, a student at Catalina Foothills High School, said she’s never seen this before and could be interested in looking deeper into it.

“I think this is a very special opportunity, and that this field will definitely be more commonly used in the future,” she said. “And quantum computing in the future will be very helpful for discoveries, especially in the medical field.”