As the last major TV provider to make such a move, Verizon said on Thursday, July 21, that it would remove the far right-wing One America News channel from its TV lineup, effectively putting an end to its broadcasting, reported first by CNET.

The former president Donald Trump’s favorite news outlet, OAN, came under fire for spreading false information about COVID-19, the 2020 election, and the attack on the US Capitol on Jan. 6. 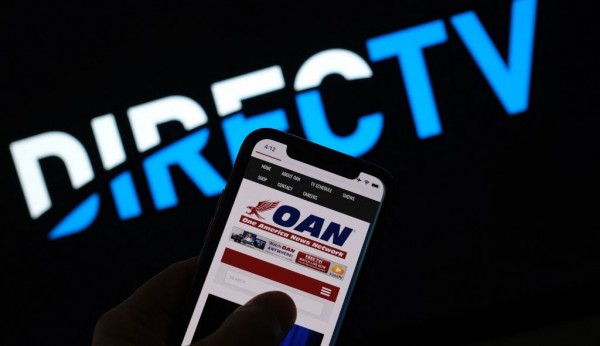 (Photo : CHRIS DELMAS/AFP via Getty Images)
This illustration photo shows a person reading the One America Network website on a smartphone in front of a DirecTV logo in Los Angeles, January 14, 2022. – Subscription television service DirecTV has decided not to renew its contract with One America News Network (OAN), an ultra-conservative, conspiratorial US channel that backs former US president Donald Trump.”

No More OAN On Verizon

OAN will no longer be available on Verizon’s Fios TV lineups as of July 31 due to an inability to secure a carriage agreement with the channel.

A Verizon representative claimed in a statement that the main emphasis of their negotiations was economics and that OAN “failed” to accept “fair terms. Hence, the decision was ultimately not politically motivated.

The representative went on to say that their company has been giving customers the freedom to select the content they want to watch and that their Fios TV platform offers a broad and diverse selection of programming options, such as “a la carte options” that work to satisfy the various content needs and preferences of their customers.

In January, satellite provider DirecTV decided to eject OAN from its roster but didn’t justify doing so. The streaming and satellite network said in a statement that following a routine internal assessment, “we do not expect to enter into a new deal when our present arrangement ends.”

In April, OAN was officially dropped from DirecTV’s lineup. The decision came after Herring Networks Inc., the company that owns OAN, sued AT&T’s parent corporation on March 7 and demanded $1 billion in damages, claiming that the network’s withdrawal from the satellite service was motivated by politics.

Reuters reported in October last year that AT&T played a big part in creating OAN and spent tens of millions of dollars to broadcast the network on DirecTV.

OAN uploaded videos on YouTube immediately after the 2020 presidential election, falsely alleging that ballots were being thrown away and forged.

YouTube stopped running advertisements in OAN videos, eliminating their capacity to make money. One America News was later momentarily suspended from the Google-owned video platform for disseminating false information on the coronavirus.

The New York Times also reported that OAN had disseminated false conspiracy theories regarding who was responsible for the Capitol’s storming.

According to The Daily Beast, the Alaska-based company General Communication will become the sole cable operator providing OAN after July 31. The company only provides services to over 100,000 people.

Related Article: Verizon is Giving the LG Wing Access to the 5G C-Band Spectrum, Despite the LG Shut Down

This article is owned by Tech Times

ⓒ 2022 TECHTIMES.com All rights reserved. Do not reproduce without permission.

Workers Against Project Nimbus are Sharing Stories and